billryan
Joined: Nov 2, 2009
I've heard the term "pretzel logic" before but never actually saw an example of it.
DeMango

I've heard the term "pretzel logic" before but never actually saw an example of it.

What an insult!
When a rock is thrown into a pack of dogs, the one that yells the loudest is the one who got hit.
Joeman

To pretzels or to logic?
"Dealer has 'rock'... Pay 'paper!'"
OnceDear
Administrator

Those would have garnered a suspension as well.

I personally follow the Uri Geller standard that one must say something they know to be false to be a liar. For example, if I truly believe the moon is made of green cheese and say as such, then I would be entitled to feel insulted if somebody called me a "liar." Same with "delusional" and "mentally disturbed." All one could do is state my claim about the moon is false and preferably state why.

No matter how ridiculous the claim, I must give the benefit of the doubt to the one making it that they believe it.

FWIW. My opinion differs slightly from Wizard. I think that's allowed, since we are talking about personal interpretations.

If someone says something which I believe to not be true, I would deem it inappropriate to call him a liar.

Until today, I would not have suspended Sabre based on that test, because I didn't perceive him as calling anyone a liar... unless I was directed to by Wizard or another moderator to suspend him.

However, Wizard has now set the precedent and I will moderate based on that precedent going forward.
This is Wizard's forum: His rules.

It's my opinion that certain members here are posting in such a way as to encourage suspensions. Certain members then go complaining openly or by PM.
In some parts, that is pretty much a definition of trolling.

Just my 2 cents.
Take care out there. Spare a thought for the newly poor who were happy in their world just a few days ago, but whose whole way of life just collapsed..
Marcusclark66

Those would have garnered a suspension as well.

I personally follow the Uri Geller standard that one must say something they know to be false to be a liar. For example, if I truly believe the moon is made of green cheese and say as such, then I would be entitled to feel insulted if somebody called me a "liar." Same with "delusional" and "mentally disturbed." All one could do is state my claim about the moon is false and preferably state why.

No matter how ridiculous the claim, I must give the benefit of the doubt to the one making it that they believe it.

You are 100 percent with the application of interpretation with common sense applied, in so many words.
MDawg

Axel guy seems to run his mouth with all sorts of claims all the time LOL.

Personal insult. Per the Martingale, one month.
It's not whether you win or lose; it's whether or not you had a good bet.
FTB

FTB
Joined: Jan 5, 2019
Update today? Or tomorrow? Would give me something to read while eating my turkey.
MDawg

Just to give you an idea of how long we were away, these were dropped off at the rate of one every time housekeeping did the suite - and we tried to keep them out except at most, every other day - at the third resort we stayed at. 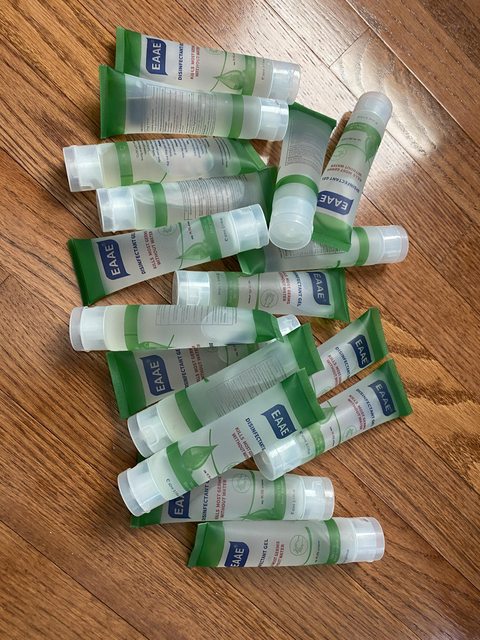 These, plus sanitary wipes and masks, were dropped off regularly, at all three resorts we stayed at. Anything that entered the suite in the way of a product or consumable, sealed or not, had to be either thrown away or kept by us. Just gives a small idea of some of the extra expenses these resorts are facing during this coronavirus crisis.

VIP at the third resort was shoving these and similar snacks at us every time I stepped in for a hot tea or Perrier, until I finally just started saying No more. You ask for something once, and they start thinking you want it every time. 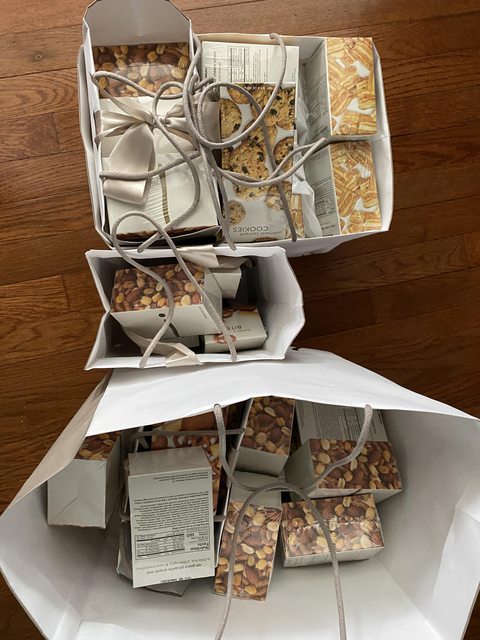 Many of the VIP services room at the casino resorts are dry these days - no food no beverage - but this one still provided full beverage service and sealed snacks.

I'm no longer a fan of hotel hygiene products - many years ago I used to hoard their little shampoos and conditioners - but I couldn't resist keeping some bars of this. 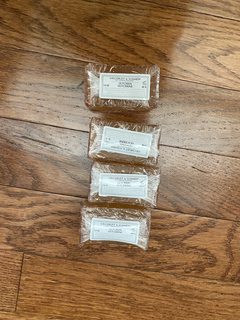 Nowhere near the level of the "600 bars of Neutrogena soap" from Fear and Loathing, but basically the same product. 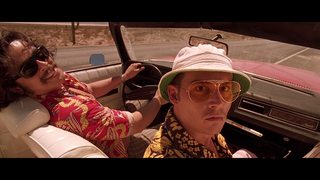 The exact day by day details of play are posted at the TruePassage forum but here is the summary: 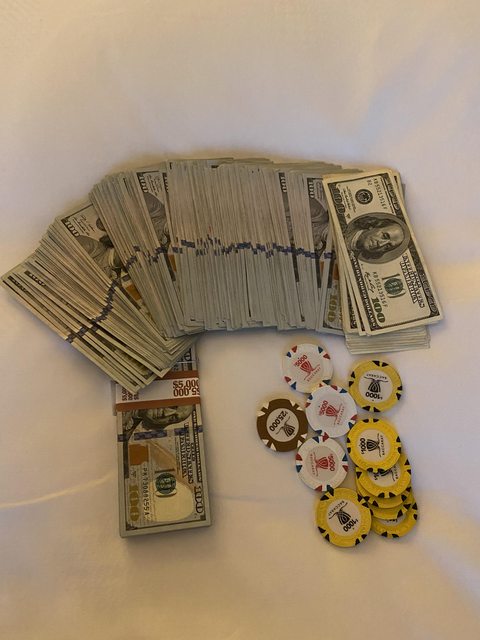 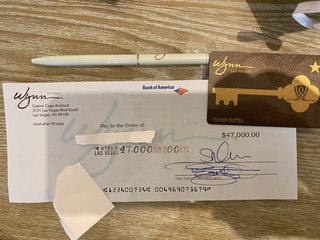 At this third resort, which is where we ended up staying the longest, we had to move after twenty some nights due to the Nevada regulation against "residents" living in hotel rooms, and the bill for that portion, the first leg of the stay at this third resort:

This had one resort fee that had not yet been comp'ed, and once this was removed,

ended up at thirty-four dollars! The folio did not show any of the room service, which was fully comp'ed off, tips and all. That is unusual - I haven't seen room service tips disappear alongside the food.

Also comp'ed off were some two thousand dollars in spa services.

Obviously as well - daily resort fees - all comp'ed off.

The reason the tips that were not comp'ed off are so low, is that almost all of these represent take-out - for take-out I'd tip anywhere from two to five dollars. The way I looked at it, a full meal, spread out over an hour or two, deserved the usual full service tip, but to place food that the chef had already placed into containers in plastic bags and hand it to me, I figured a small token tip was enough.

As far as tipping cocktail waitresses and VIP staff, I kept a supply of $5. bills for that. I'd cash one of my winning $100. checks every other day or so, and tip all of those fives out.

As well, I put significant (up to $250.) tips for the dealers on the side of my own bets. I'd say, without a doubt, that during the course of my stay I tipped out easily at least ten grand to the dealers. They all love me.

The second half of the stay in the suite at this third resort, was also almost fully comp'ed, including another fifteen hundred or so in spa.

There were about forty-five dollars in food that the host hadn't comp'ed yet visible on that screen, which he handled before we checked out. He did not comp the spa retail, which left the final bill between the two stays in the two identical 1300 sq. ft. suites, at around six hundred dollars. A mere pittance, and representation of a solid forty grand or even more of comps.

By the way, to give you an idea of the level of play I was giving them - and to FURTHER demonstrate that one need not lose to get comp'ed fully - for anyone who knows, there is one restaurant on the list there that is not even owned by the third resort, and yet the host comp'ed it too. That is rare. When they comp an outside restaurant they have to cut them a check for the full amount.

So that was our - almost seven weeks in Vegas.

By the way, I didn't get any of that spa stuff. I'm a thoroughbred, in that all I do in Vegas is play, go to the gym religiously for at least an hour each time at least every other day, and eat well and have constant sex. My gaming sessions are one a day only, and might be just a couple of hours, although some were as long as twelve hours.
I might stop by the pool just to see the sun for ten minutes every now and then. 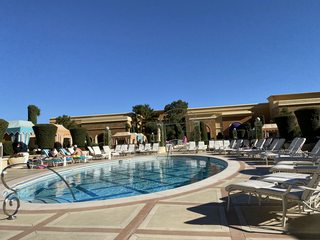 My wife enjoyed all the spa.

Fully comp'ed all the way, and take home just under $74,000. across three resorts. Given how much I tipped out to dealers in winning bets alongside mine, and in cash to cocktail waitresses, VIP staff, bellmen and other assorted employees, and also some cash that we spent, in all, a great, successful trip.

I asked the host at the third resort (only) about my stats, and he confirmed, on THEIR computer they had me winning just under 53K, theoretical loss just under 80K, play about 77 hours average bet just under 1200. I'll get around to asking about my stats at the other resorts too, but what I know for sure is that everything was comp'ed and I WON at all three resorts.

Put another way - here are all of the markers I pulled and paid back at the third resort, which is where we stayed the longest. I lost track adding them all up, but close to a million. 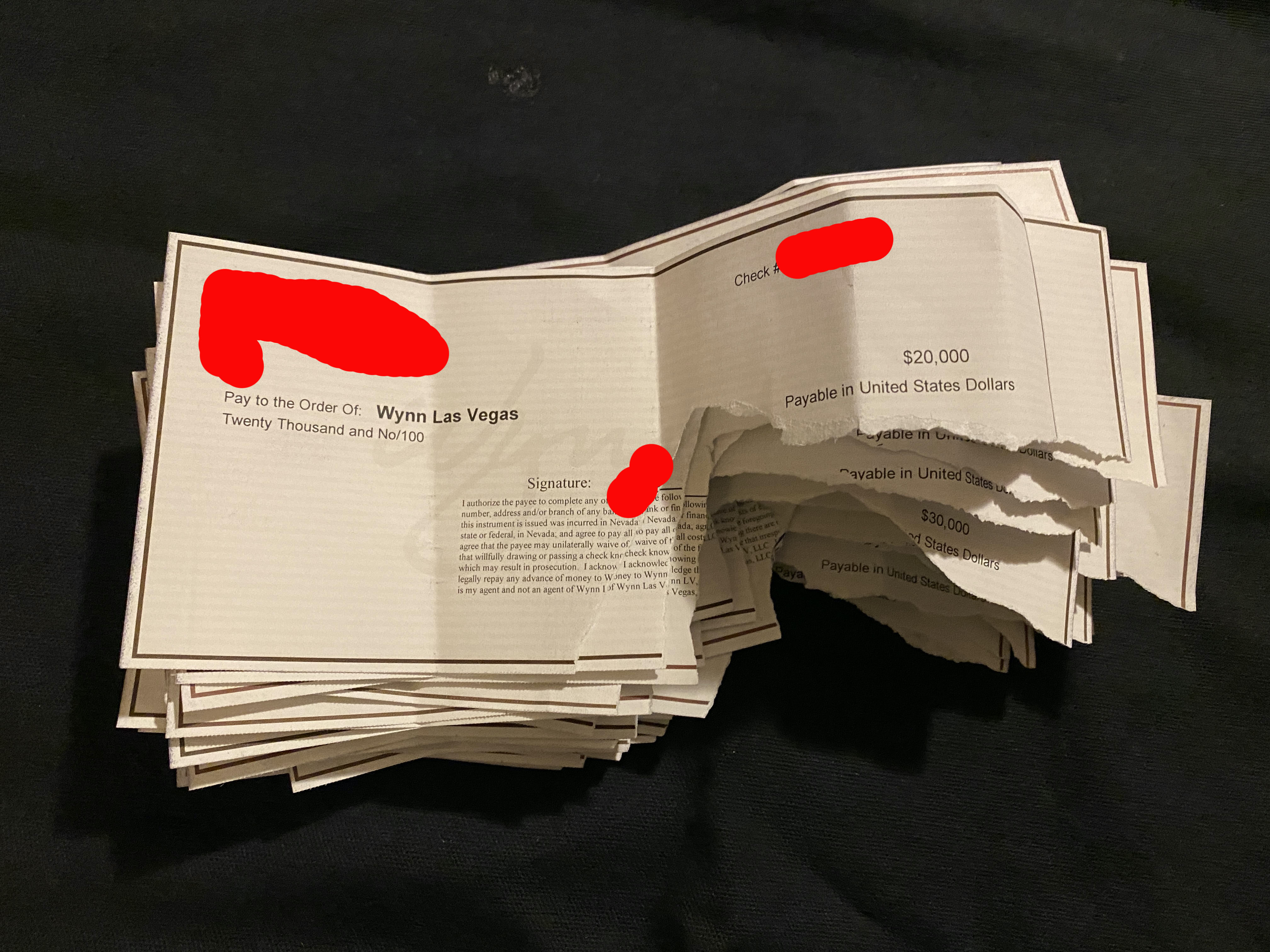 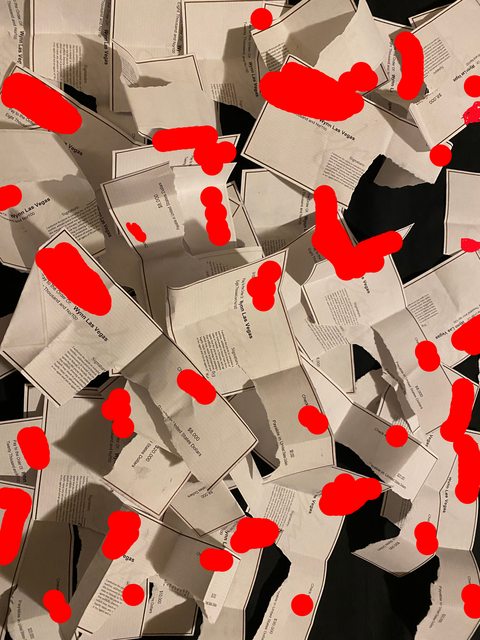 It wasn't easy I am telling you, just because I won almost each day doesn't mean that I was ahead at all moments of each day. All's well that ends well though. The take home is what matters! 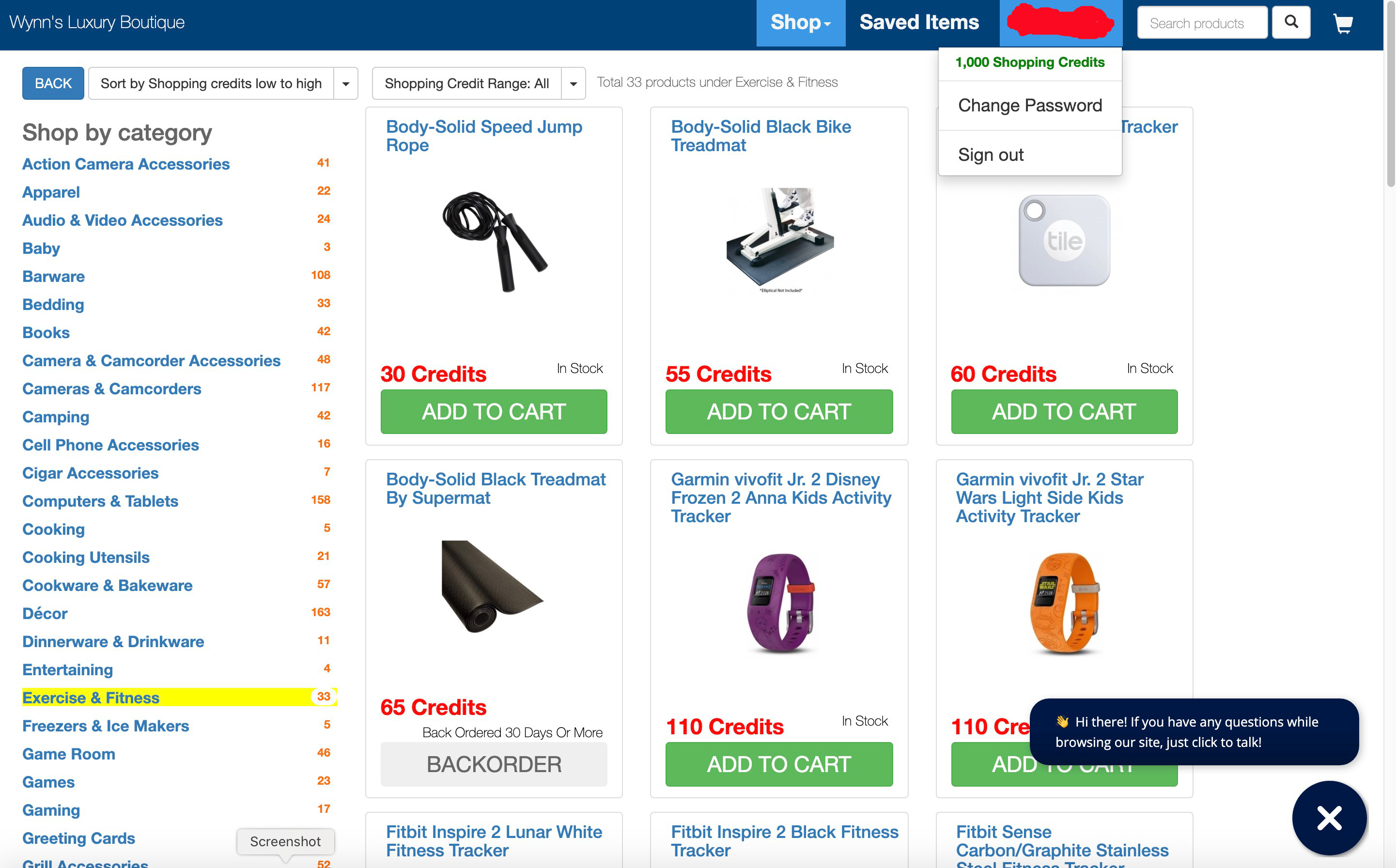