What Affect Does He Have?

If there is one subject that comes up quite frequently in the world of gambling, particularly with respect to high-limit slot and Video Poker Advantage Players and Recreational Players alike, it is that of paying taxes on jackpots.  There is and has been some question of whether or not the effect of tax deductions should be factored into the value of the play, and as with most things gambling, I am here to opine.

The first thing that we should understand is that the tax laws currently call for a handpay (in the United States) of any win of $1200 (or more) on a slot or Video Poker game.  Obviously, it's beyond my capabilities in a single article to give examples of the effect this may have for each individual tax bracket.  Furthermore, I'm not an accountant or tax agent, but if this situation applies to you, I strongly suggest you talk to someone who is of one of those two professions.

The only question I am here to answer is whether or not this should be counted against the Expected Return of a play, and spoiler alert, my answer is no.

Do You Have a Job?

If you have a job, then you are likely accustomed to paying taxes on your income, unless you are among the lowest earners or have a plethora of off-setting deductions.  For instance, if someone earns a salary of $100,000 a year and is asked his/her salary, does that person typically say, "$100,000 per year," or would that person quote a salary based upon any taxes and offsetting deductions that take place? 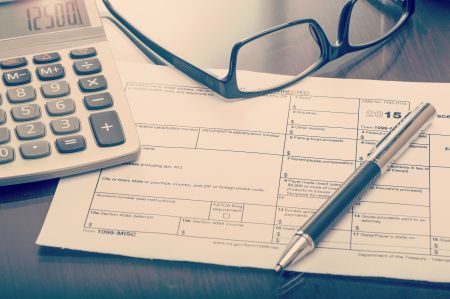 For recreational players as well as Advantage Players, this log of gambling activities is going to prove extremely useful in the event of an audit.  Furthermore, most recreational players are negative expectation gamblers, and as such, are very likely to generate a loss over the course of a year.  (The likelihood depends on a number of factors such as House Edge, Variance and how much coin-in a person plays)  In any event, most Recreational players will have gambling losses that exceed wins, unless they have the good fortune of hitting a tremendous jackpot.

Good try MegaBucks jackpot winner, that ain't getting written off.

For some recreational players, there is a minor problem if they are also low(ish) income earners.  The problem is that such players will often not have gambling losses (and other deductions) in excess of the Standard Deduction.  In the event that the Standard Deduction exceeds gambling losses plus other deductions, the individual in question will pay taxes on the gambling wins...generally.

Once again, this is where strong record keeping comes into play.  I would obviously never encourage anyone to fudge their tax forms, but let's keep in mind that a player must file taxes on ALL gambling wins; this fact is actually beneficial for the person that is running into the standard deduction problem if he/she lost overall:

The reason this is the case is that the player can report ALL gambling wins and it is quite feasible that the off-setting losses will now exceed the standard deduction.  In other words, unless everything that you did resulted in a handpay, if you have more in total winnings than the amount of the standard deduction, (and more in losses) then the losses can be used to offset, at this point, and your deductions might exceed the Standard Deduction.  In many cases, this will result in paying less, or possibly even no taxes, on those winnings.

I cannot emphasize good record keeping enough; to simply have a piece of paper that states, "I won $12000 and lost $15000," is not going to be suitable.  At a minimum, you would at least want to identify specific dates, perhaps times, the gambling establishment(s) you were at on those dates, the game(s) you played and the overall result of your play.  It's possible that you would want to be even more specific than that.  Again, I would never suggest that someone fudge these records, so keep good and honest records, and if taxes are due...just like any other American with a job and a large enough income...pay your taxes.

Does It Affect the Value of a Play?

Do taxes affect the value of your job?  Maybe they do, I don't know, but they are certainly inescapable to some degree when it comes to income taxes related to your employment.  With that said, though, I do not personally view taxes as detracting from the value of a play.  If you are gambling at a positive expectation, then a positive expectation is precisely what you have.  Given the fact that a gambler is supposed to report any winnings that stem from the act of gambling, (not just handpays!) I can only conclude that if an individual wants to suggest that taxes on handpays diminish the value on those plays, then the taxes you should be paying on ALL GAMBLING WINS diminish the value of ALL POSITIVE PLAYS, and negative plays, as well.

The IRS almost tacitly admits by way of having a required reporting threshold that players are not going to report all of their gambling winnings.  Certainly, an individual with one handpay (all that is reported) for a given tax year is extremely unlikely to have walked into the casino and hit a handpay on one pull of the handle or press of the button.  The IRS is essentially letting these people slide by only making them report the required wins...unless they lost money and are reporting the required wins only...then they are, in fact, hurting their own value.

Ultimately, if you play at a positive expectation, then the expectation is that you will win money (i.e. income) over the long run.  Income gets taxed, but if you have an expectation of over 100% on your plays, then your income will actually be, well, your income.

I was once denied payment of a winning para-mutual trifecta at a dog track in Florida because I didn't have my social security card. I had ID, just no SS card. Do you know if casino's require a winning "hand pay" customer to have his/her SS card? This question might also apply to cashing out chips at a casino cage in excess of some amount they have established?

And this kick in the ass article that does not include qualifying for student loans, help with prescriptions from the manufacturer, and too many others to list.
http://moneyover55.about.com/od/taxtips/a/Hidden-Gambling-Tax-Hits-Retirees-Hard.htm

That's right, there are far too many possible individual situations to list here, so I went with what I believe covers most people. However, I suggest everyone read the Article to which you linked (I did, and it's very informative) and would also, as in the Article, suggest everyone consult an accountant or tax professional to understand how the tax code may apply to their specific situation.

I know some casinos in Florida just ask for ID and you verbally tell them your SS and they write it down.

I may have miss read somthing Mission but IMO. Taxes CAn turn a +EV situation into a negative one. Let's take an extreme example. Pretend you have somthing that's 100.01 It can be BJ, VP or any game.

Let's take VP on a $25 denomination. One year you hit 3 RF's and break even on the drop. Now your up 300k for the year. You now pay your taxes. The next year you lose 290k you should still be up 10k but you paied more than 10k in taxes the first year.

Good point on Florida, I really think the policies are quite arbitrary and vary from House to House.

I think the tax thing is a matter of perspective. If you owned a business and had profits one year and a loss the following year such that the two year period result was less than the taxes you paid the first year, would that mean you lost money overall for the two years?

My point is income taxes are based on income, which casino wins are if they exceed losses that year. Now, I don't think they should be unless ALL losses can be written off income, but that would open things up to fraud, obviously. I just think gambling winnings shouldn't be taxed at all, or the threshold should at least be 5k, or something.

In my opinion, though, that doesn't make a play bad. A play is either +EV or it is not, and if you run EXACTLY at the EV of a +EV play, then you would pay taxes on whatever the +EV amount is. That could definitely be construed as cutting into the EV of a play, but since the EV is the expectation, then the Expected amount of taxes are also based on the Expected win, and thus, can never make a positive play negative.