Much Ado About Two

As many of you already know, the NFL has changed the PAT (aka Extra-Point) from a snap from the two-yard line to a snap from the fifteen yard line, which effectively changes the try to roughly a 32-yard Field Goal equivalent rather than a seventeen yard attempt.  There has been some talk in Sports Betting circles that this Rule change might change the value of certain Point Spreads and could also change the value, potentially, of key Over/Under bet numbers.

In my opinion, the bettors can relax. 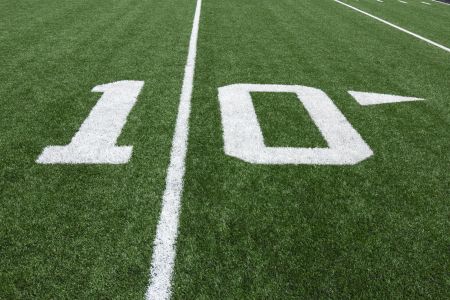 While it is true that there should be more missed PATs, (Expected success rate of about 94%-rounded down-compared to the previous near 100%) that shouldn't be expected to change the strategy for when to go for two too much.

Initially, this seems counter-intuitive given the fact that the Two Point Conversion (based on a 50% success rate) should have a value of one point compared to a value of 0.94 points for the PAT.  However, unlike Expected Value in gambling, the decision of whether or not to go for two still leaves an open-ended result whereas gambling decisions are closed when they are completed.

For a basis of comparison, let's take a look at the game of Craps.  Imagine a player puts a $10 bet on the Don't Pass and any Point number is established, if the player were to then Place/Buy that Point for $10, then the player could no longer lose any money on the final result provided the player makes no further bets.  In other words, the probability of losing becomes 0% and the probability of winning becomes contingent on whatever the Point Number is.  The player could also Place/Buy for a lesser amount than the initial Don't Pass bet and lock up a small profit either way.

Of course, as any Craps player would immediately recognize, this is a very foolish way to play Craps.  In addition to the fact that the Don't Pass bettor overcomes his initial disadvantage (7's, 11's on the Come-Out) when a Point is Established, given that a Point has been Established, the Don't Pass bet itself now has a hugely positive Expected Value which is always reduced by hedging with a Place/Buy bet on the Point that has its own House Edge.

In almost all cases, (other than hedging on life-changing sums of money) the Expected Value is going to be the key point in whether or not making a certain bet is a prudent thing to do.  In all situations, gamblers should try to maximize their Expected Value.

However, maximizing the Expected Points, shall we say, is actually a poor decision in NFL Football.

The reason for this is because the decision of whether to attempt a PAT or go for a 2PT Conversion is not a closed-ended decision.  There is still a game to be played afterwards.  For an example, let's say that Team A is the first team to score in a game and that score happens to be a Touchdown, now we're going to look at the most common scenarios based only on the success rate of the PAT vs. the 2 PT Conversion.

The first thing that we notice is that Team A is going to make a decision based on the possibility that Team B's next score is going to be a Touchdown.  Although, it is also worth noting that any failure to produce additional points by Team A will also put Team B in a position to tie the game with Two Field Goals.

We're going to round down and call the possibility of a successful PAT 94%, and whether or not Team A is successful, the decision that makes the most sense for Team B if they score next and it is a Touchdown, will be to attempt an extra point.  For these purposes, we're going to assume that.

What we see here is that both Teams have an equal expected point value of 6.94 total points on the plays in question, and further, both teams have an equal probability of ending up tied 7-7, being up 7-6 or being down 6-7.

Team A also has the option of going for a Two-Point Conversion, which at a probability of success of 50%, has an Expected Value of one point.  We immediately notice that the Expected Point Value is greater than with the PAT, but does that make it the right decision?

The answer is, "No," because this is not a closed proposition.  A failed Two-Point Conversion attempt not only enables Team B to tie with two Field Goals, but it also makes it highly probable that they will take the lead if they score a Touchdown.  Let's look at our scenarios:

In gambling, most bets that we place are a closed decision.  Furthermore, once the bet is resolved, that's it.  If the Don't Pass hedger has a Point of Four Established, then either a four or a seven comes and he is on to the next bet.

Football is totally different in that it is completely open-ended.  Neither team knows if or how many times the other team will manage to score, or what types of scores those will be, so the focus is more on the highest probability of staying in the lead at all times.  The only thing that ends the game (other than going to OT) is the clock reading 00:00 in the Fourth Quarter.

Given that the focus is on getting in the lead, staying in the lead and not giving the opponent an easy opportunity to get in (or maintain) the lead, I would conclude that the vast majority of scenarios in which a Two-Point Conversion makes sense have not changed.  The only question is going to be one of a Missed/Blocked PAT directly affecting the Line, and those scenarios are likely to be few and far between.

Very good points. Another thing to consider is that 2-point conversion plays are currently rare and very specific (exactly 2 yard endzone play, very little fear of a turnover), and therefore teams can afford to practice and perfect a small subset of plays that will rarely be seen by their opponents. If a team was to choose to go for 2 on all TD plays, they would have to start using a wider variety of plays that wouldn't be as well practiced to keep an element of surprise.

Keep in mind that last year's critical Super Bowl play was likely a 2-point conversion play that New England had prepared for and predicted.

The net point being that the conversion rate would likely drop well below 50.5% if they were commonplace.

This article makes a strong case that going for two points is the best play mathematically: Kick the PAT or go for 2? Math favors the 2-point conversion (link: www.milehighreport.com/2015/5/20/8628917/kick-the-pat-or-go-for-2-math-favors-the-2-point-conversion).

Starting at least 7-8 years ago, NFL statnerds have been publishing info that, in most game situations, coaches should go for fourth and short rather than punt. The coaches are aware the analysis, have commented publicly, and don't necessarily disagree. The coaches also punt too often.

The analysis is good but the coaches have to buy into it. It's unlikely the coaches will announce their plans ahead of time. Need to wait awhile to find out if there is any effect on points scored.

Although this high school, found it interesting as well http://profootballtalk.nbcsports.com/2015/08/14/nfl-teams-pick-the-brain-of-high-school-coach-who-never-punts/

I think that you bring up a good point, but I would imagine that it would only have a minimal effect on the actual conversion success rate, maybe a couple percent less. The reason that I say that is that, as it stands, teams already have a vast array of short-and-goal plays and defenses already prepare for short-and-goal plays in trying to prevent TD's. Honestly, if I were going to pull my most creative plays out of the bag, I'd do it when I was going for six, not two.

I actually agree that it is the best play mathematically, with respect to Expected Points. Although, the Article really took some liberties in rounding down the PAT success rate.

I actually presented a very similar argument above in terms of Expected Points and in terms of the Expected Point Advantage the go-for-two team would have over their opponents. The problem is that the Expected Points ignore everything else about football, perhaps notably on a first score that, a failure now enables the other team to tie with two FG's and quite probably take the lead if they score a TD.

The math also supports my theory for first score TD's which is, if the Team who scores first goes for two, then the most likely scenario if the next team also scores a TD is that (out of four possible scenarios) they will take a 7-6 lead. The first team leading 8-6 and the probability of an 8-8 tie are equally likely.

That's true, but there's even more to this than Expected Points, in this, you also have to look at game strategy.

A friend of mine who coaches Middle School football adopted the same philosophy, of course, a M.S. punter can kick for significantly less distance than your average H.S. punter.

What this article didn't discuss (unless I missed it) is that the rule change means you must declare your intentions.

As a result, the option of a two point sneak play is removed, and the possibility of salvaging a bobbled FG snap with a two point conversion is greatly reduced.

If you go for the two and make it you force the other team to either score twice to pull in the lead or match your accomplishment. I admit that the difference between 6 and 7 is big, but so is the different between 7 and 8. Furthermore, I think early in the game it should be about maximizing expected points.

I have to go on record as saying that I respectfully disagree with your point of view on this one.

I'm usually not inclined to disagree with you, because that usually means I'm wrong about something.

The scenario is basically the same, a success forces the other team to match the accomplishment, but if you fail and the other team scores a TD, now they have a 94% chance of taking a one point lead with very little time on the clock, if any.

My point is that the beginning of the game is no different in terms of strategy because you don't know who will score again, how many times, or what those scores will be. It could be 6-0 until the middle of the 4th, then the other team scores, and now they have a 94% chance of taking the lead. All of that to have a 25% chance (assuming a TD) of getting an 8-6 lead if the other team fails to convert. In the meantime, even with eight, a TD and a FG put the other team in the lead, as does 3 FG's. I just have trouble seeing any upside other than Expected Points, but Super Bowls aren't won by scoring the most cumulative points in all your games.

End of game situations are different. My comment refers to early in the game. I suggest we agree to disagree.

I've spend three days on this and have presented my results in the last question of Ask the Wizard column # 293 (http://wizardofodds.com/ask-the-wizard/293/). Enjoy.

Such toys are invented for a reason, with their help, you can diversify the sex life, because sometimes all the same and quickly get bored. I often have fun with https://escortlarnaca.info , there definitely is a variety and experience.