How Do They Do It?

There was a recent thread with respect to a promotion at Mount Airy casino by which if either of the New York football teams win at home in November, then the casino will give any players club Member $1 in Free Play for every point the winning team scores the following day.

Following the OP, there were a number of posters who were dumbfounded by how Mount Airy Casino could offer a promotion of this nature which might see them giving tens of thousands of dollars in Free Play to a number of patrons.  I will admit, while this isn't the most aggressive, "Free Play for Everyone," type of Promotion I have ever seen, it is up there.  However, I think this is a great promotion for the casino for a number of reasons:

The first thing to note is that Pennsylvania has one of the highest slot machine tax rates in the country given that the Commonwealth takes a hefty 55% of all gross slot revenues.  While it may seem that the casino is not helping its cause by giving out Free Play, the opposite is actually true as any, "Promotional Credits," can be offset from the casino's gross slot tax obligations.

In other words, let's imagine that a player takes advantage of this promotion and plays to a 100% return:  Effectively, the player wins $20 which comes off of the casino's slot revenues AND the $20 in Free Play given to the player is also offset from the casino's slot revenues.  Therefore, the actual total slot win goes down by $20 and $20 is offset from the other revenues.  If the player does not come in at all, then the casino does not lose anything, but does pay 55% on the $20 in revenues that the Free Play player did not win, thereby causing them to pay $11 in taxes on the slot revenues.

The result of the player winning $20 is that the casino loses $20 in actual cash, but the casino does not pay the $11 on the $20 in slot revenues that it otherwise would have paid.  As a result, the casino is actually only down $9 on the overall transaction.  It gets better, though, as the casino is also able to deduct the $20 in promotional credits themselves from the slot revenues which results in another $11 in tax savings.

Obviously, you couldn't have players doing this constantly because a negative slot revenue (in which the casino pays no tax) is not any good, but the point is that the players that might, "Take the money and run," do not hurt the casino much at all. 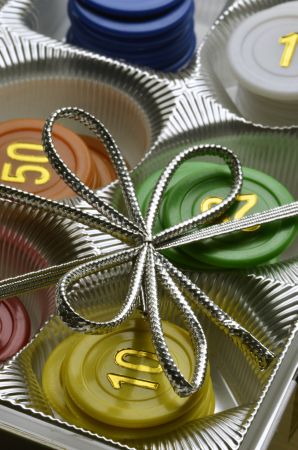 Another boost to the casino is a promotion that will get coveted slot players in the door on what is typically a slow day for casinos, Monday.  There are many value-minded players that would like to stop in and take advantage of the Free Play being offered who are going to proceed (especially in terms of EV) to lose all of the free play and some of the money in their own wallets on top of that.

The Marketing Department has access to the average slot spend per customer and has a strong handle on how much money the average customer is going to lose as opposed to the amount of Free Play that is being given out.

However, the average spend per customer is certainly in the casino's favor, and I should imagine that the casino also has a general idea how many total customers are expected to just come in, play off the Free Play, and leave...which, again, doesn't really hurt them, either.

Did I mention that the players must come in to pick up the Free Play on a Monday?

4.)  The Rules Are (Mildly) Confusing

The idea here is that players might get the misunderstanding that they are supposed to receive Free Play when they have no Free Play coming to them.  For example, some players might mistakenly think that it is for when either of the New York teams win, regardless of whether or not it is at home.  Granted, the Rules address this point pretty clearly, but for those few people who do misunderstand, it is not likely that they are going to go all the way to the casino just to turn around and go home when the Rules are clarified for them.

Nope, they are going to play!

5.)  There Are Other Examples

Wouldn't it be fun if there was a promotion by which players would get Free Play not based on a certain team winning at home, but, let's say just because a football game had actually taken place?

Let's go back to the Four Queens casino and Binion's back during the 2013 NFL Season for one of the coolest promotions ever:

The way that the promotion worked was that anything you could buy at The Chicago Brew Pub in Four Queens or Benny's Bullpen in Binion's, which was inclusive to food, drink and cigars would be refunded 100% (up to $50) in the form of free slot play in each respective casino if there was an NFL game played that day.  I don't believe that either of those two casinos ran the promotion last year, but to my knowledge, they ran it for the entire 2013 NFL season, just like they said they would!

It actually seems like not too many people exploited the promotion (I did!) because there was only one night that the Chicago Brew Pub was packed and I don't recall Benny's being packed on any given night.  But, even if they had, I don't think either of the two casinos would have lost much money on it.

The first thing to remember is that $50 in Free Play for buying $50 in stuff doesn't actually cost the casino $50...it costs the casino whatever they paid for the stuff, which probably has a markup of roughly 100%.  In addition to that, I think a promotion such as this creates goodwill for a good few players (I'm here talking about it, right?) to the extent that it is something that people remember the casino doing and makes them likely to speak well of the casino and visit in the future.

Furthermore, many of the players are actually going to continue to play after the Free Play is gone and lose well in excess of the amount of Free Play received.

I could think of a seemingly limitless number of promotions that people would think the casino was crazy for green-lighting, but I'll spare everyone reading this...this time.  Suffice it to say that the vast majority of these promotions pay off for the casino in the end, and ultimately, it can be pretty easily determined what the cost to the casino is per patron who takes advantage of a given promotion.

That's also a good thing for a casino.  The promotions that hurt the casino the worst are those in which the casino made a serious math error, with these sorts of promotions, they know what they're giving away.