That gets most of the serious filth off them so that I can feel OK about putting the things in my luggage.

LOL! I feel that way, too. I have no trouble handling the things all day, but store them with my clothes at night? Hell no!
"So as the clock ticked and the day passed, opportunity met preparation, and luck happened." - Maurice Clarett
Doc

... but store them with my clothes at night? Hell no!

Some casinos chips have got cooties.
rdw4potus

After an unintentional hiatus, the posting of daily chips in this thread resumes! I'm still a little hot about what happened to me for the past few days. Long story short, I was added to a business trip at the last minute. At the airport, I decided to make my carry-on as light as possible by adding my tablet and laptop to my checked bag. Then the airline lost my checked baggage. It took several days for my baggage and I to be reunited, mostly because of airline incompetence (the call-center told me it would be delivered to the hotel, the folks at the airport were waiting for me to pick up the bag.) It's funny - after I bought enough clothes to get me through the business part of the trip, I still felt strangely naked without my tech toys.

Today’s chip of the day comes from the Akwesasne Mohawk Casino in Hogansburg, NY. The casino was opened in 1999, and has been significantly updated and upgraded since then. The current incarnation of the property features 1560 gaming machines and 38 table and poker games. We recently discussed this property here.

I visited Akwesasne as part of a weekend respite from a business trip to NY, PA, and NJ. I think I griped about the scheduling of the business trip when we were discussing casinos in PA and WV. I wound up driving and flying a big figure 8 through NY, ON, NJ, PA, MD, and WV (I may also have been in OH and DE, but with no stops). Visiting Albany, Buffalo, Toronto, Ottawa, Philly, Pittsburgh, Erie, Baltimore, and Atlantic City in 5 days was fun, but visiting the cities in that order was just silly.

I was really impressed by this facility. It was much bigger and more upscale than I’d expected. Sort of like how Rama was much larger and nicer than expected. I’m really not sure where Akwesasne’s clientele come from. Maybe it’s just the locals. And I guess this is the closest US casino to Burlington, VT. Whatever the reason, the casino was packed when I visited (it WAS a Saturday night). I collected my chip playing 3 card poker, mostly because that’s where there was an open seat. Later, I also played some BJ while I waited for caffeine to kick in well enough to get me back to my hotel.

The MOGH indicates that this chip is a Bud Jones model. Absent a BJ marking on either side, I’m a bit skeptical. It does look like a BJ/B&G mold. I've got to say that these plastic chips hold up well. This chip was 11 years old when I collected it, and it looks and feels pretty much new.

The MOGH indicates that this chip is a Bud Jones model. Absent a BJ marking on either side, I’m a bit skeptical.

Well, does your Akwesasne chip look anything like this image that I created from the options available at the Matsui "Design Your Chip" page? With Matsui offering this pattern, I think you are wise to be skeptical that your chip is from Bud Jones. 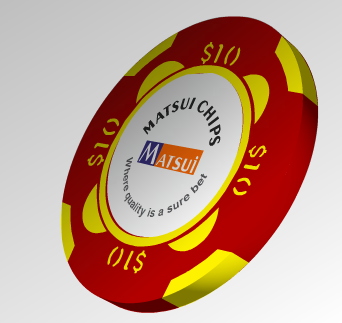 Edit 9/24/15: I finally got my own Akwesasne chip and posted it here.
rdw4potus

Today’s chip of the day comes from the Seneca Gaming location in Salamanca, NY. The Seneca Gaming facility is a small 15,000 square foot slot barn up the street from the Seneca Allegany casino. It features 280 slot machines and a small poker room. I visited the casino between stops in Buffalo and Niagara Falls on my trip to NY, PA, ON, and NJ that I mentioned yesterday.

This facility is quite small, and much less flashy than the neighboring Seneca Allegany facility. There were very few slot machines that I’d ever seen before. I suspect that they’re VLTs or bingo-based games. At any rate, the games were unique.

I played through two rounds of blinds on a poker table to collect my chip, which I think is manufactured by Chipco. The MOGH doesn’t have an entry for this facility, and there’s no CI on the chip, but I think Chipco made this chip. The poker itself was pretty brutal. Tight players and bad cards made for absolutely no action. I think there was one showdown in the 18 hands that I played and I wasn’t even a part of it.

"So as the clock ticked and the day passed, opportunity met preparation, and luck happened." - Maurice Clarett
NokTang

NokTang
Joined: Aug 15, 2011
What does that "Keeper of the Western Door" mean/imply? Thank you.
Ayecarumba

What does that "Keeper of the Western Door" mean/imply? Thank you.

With a proud and rich history, the Seneca were the largest of six Native American nations which comprised the Iroquois Confederacy or Six Nations, a democratic government that pre-dates the United States Constitution.

The Seneca Nation of Indians currently has a total enrolled population of nearly 8,000 citizens. The territories are generally rural, with several residential areas. Many Seneca citizens live off-territory, some are located across the country, as well as in other countries. Off-territory residents comprise nearly 1/2 of the citizenship.

They are also known as the, "Great Hill People", but maybe that doesn't read so well on a casino chip...

If you are wondering about the black squiggily shapes, it is not a Rorscharch inkblot. The shapes represent the outlines of the three current Seneca territories. See more info here.

Community member Face should have something to add...
Simplicity is the ultimate sophistication - Leonardo da Vinci
Doc

Doc
Joined: Feb 27, 2010
On Thursday, I picked up the souvenir chips I had in mind to gather on this visit to Las Vegas: Alamo, Aliante (non-Station), and Quad. Because of the bizarre situation with the person now in the lead role for this thread not being allowed to post for a few days, I thought I might post the Aliante and Quad chips. Unfortunately, I don't have a computer with me, and I haven't been able to upload images successfully to my hosting site from either my phone or my tablet. Seems there might be a conflict between my host's software and my Android Chrome browsers.
Doc

Doc
Joined: Feb 27, 2010
Just a little update for you web design geeks regarding my difficulty uploading the .jpg files from my phone and tablet:

Tech Support at my hosting service said that Flash must not be working on my Android mobile devices and that I need to install the latest version. I sent a reply quoting the Google FAQ page for developers. It said that the Android OS does not support Flash at all because Adobe stopped supporting Flash for mobile devices some years ago.