Funny....but I'm betting it's some video-poker-playing advantage player who just didn't realize that all-important 3 tenths of a percent like Dan Paymar promised.
mkl654321

"I didn't want to write this in the article, but think if you're going to commit suicide by jumping, this bridge would be a very convenient choice. It would be easy to jump over the wall, the scenery is outstanding, and there ain't no way you could survive. There is a small percentage of Golden Gate bridge jumpers who survive. I think the shallow water below this bridge would be fatal in the unlikely event the initial impact wasn't."

That comment's just absolutely BEGGING for an essay from mkl! When I saw your pictures I sent a comment to my wife because we're going over it tomorrow and again Sunday. What I said was "no jumpers yet, but there WILL be". What's the line on that one?

You're jumping off the bridge tomorrow? Yay!

Well, if I were a teacher that made $26,000/yr, I might think about it.
Wizard
Administrator

That comment's just absolutely BEGGING for an essay from mkl! When I saw your pictures I sent a comment to my wife because we're going over it tomorrow and again Sunday. What I said was "no jumpers yet, but there WILL be". What's the line on that one?

I'll bet on almost anything, but that is too morbid to wager one. However, just for the sake of argument, I set the line at the first jump as before/after 1/1/11.

Enjoy the bridge visit.
It's not whether you win or lose; it's whether or not you had a good bet.
mkl654321

I was trying to be funny. But what's REALLY funny is you think $55,000 is a respectable wage in this day and age. No wonder you live a virtual life here.
thecesspit

I was trying to be funny. But what's REALLY funny is you think $55,000 is a respectable wage in this day and age. No wonder you live a virtual life here.

We established in threads passim that your wage is in the top 2% of the country. 55k/pa is around (if not above) the average US wage.

It's certainly above the average Canadian wage.

Still, the US dollar is now worth less than a Canadian dollar, so I pity my poorer southern friends. (Damn it crossed back below again...)
"Then you can admire the real gambler, who has neither eaten, slept, thought nor lived, he has so smarted under the scourge of his martingale, so suffered on the rack of his desire for a coup at trente-et-quarante" - Honore de Balzac, 1829
mkl654321

I was trying to be funny. But what's REALLY funny is you think $55,000 is a respectable wage in this day and age. No wonder you live a virtual life here.

As another poster pointed out, 55K/year is above the average American yearly wage. I also have a pretty good health care plan, and retirement benefits. So you're, as usual, completely full of shit. And I, unlike you, don't blow tens of thousands a year playing bad video poker, so I probably have much more money than you at the end of the year. It's not how much you make, it's how much you keep.

Now go ahead, you prick, say something else snotty, for the sole purpose of behaving like the worthless, abrasive, ignorant crapsack you are.
The fact that a believer is happier than a skeptic is no more to the point than the fact that a drunken man is happier than a sober one. The happiness of credulity is a cheap and dangerous quality.---George Bernard Shaw
Doc

Doc
Joined: Feb 27, 2010
This thread started out discussing the new by-pass bridge, got diverted onto various topics such as the load the water imposes on a dam, and eventually turned nasty as many threads have done in the past few months. It has been dormant for a month and a half, but I am resurrecting it as an appropriate thread in which to post some comments about my recent visit to Las Vegas. Actually, I think I will cover several topics here, so I will both return to topic and divert in the same post!

This past week when I had the opportunity to dine with the Wizard, I mentioned that I had finally made it back out to the dam (attempted visits in January and April were aborted due to traffic jams) and got to walk on the bridge. He said that after writing his article about the new bridge, he had subsequently taken some friends for a visit. They had encountered parking problems at the bridge visitors' lot, so he asked that I post a write-up of my visit.

In the Wizard's article, he mentioned that while there is an admission charge ($7) for parking in the deck at the dam, there is free parking on the Arizona side. Being a cheapskate, I gave that a try. It turns out that the very first parking area on the Arizona side had a sign saying that parking cost $7. I didn't see anyone there collecting money, but they may have appeared if someone pulled in. There were some cars parked in that area. There are at least three more parking areas, progressively further up the hill on the Arizona side, and they were heavily in use when I got there, about noon on a Tuesday. A car was pulling out just as I arrived, so I had no difficulty, but there may have been a bit of luck there. I don't know that everyone willing to walk down and up the hill will have the option of parking for free.

I took a few pictures of the bridge from the dam and present one of them below. It is similar to the one in the Wizard's article except that I picked a more opportune time of day and avoided the lens flare. Not a very attractive sky as background, though.

My wife asked how this bridge compares to the New River Gorge Bridge in West Virginia, which we have visited a few times. I did not know, so I looked it up on that most reliable source: Wikipedia. Naturally, the articles there have some ambiguity, but I will post what they claim for height, length, and span. I also include the data for the Royal Gorge Bridge in Arkansas, even though it is only a pedestrian bridge.


Yes, the Wikipedia article lists two different heights for the new bridge. In any case, each bridge presents at least some basis for a claim that it exceeds the others.

Of course, I also wanted to walk the bridge for a view of Hoover Dam I had never before seen, except in photos such as the ones the Wizard presented in his article. Here is one of the photos that I took. 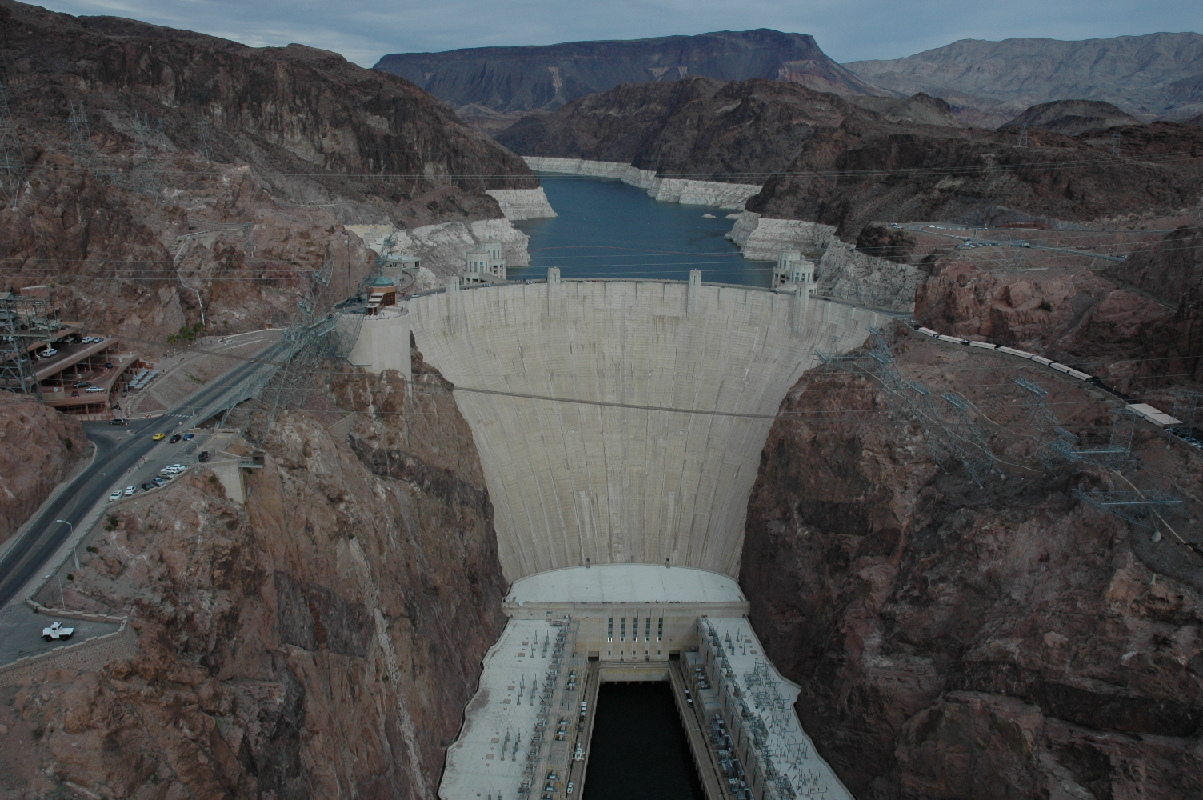 The parking deck is visible on the left edge of the photo at about the same level as the top of the dam. The free-to-look-for-a-space lots are visible near the right edge and higher than the dam. It's an easy walk down to the dam from there, but I can verify that fat guys can feel the burn if they climb the stairway back up to the lot. There is also a more gradual climb available if you follow the walkway on the side of the road.

Speaking of stairs, walkways, and parking lots, this final photo shows the parking lot for walking up to the bridge. The Wizard said this lot was completely full on his second visit and he had to park in the dirt lot across the highway. The Tuesday we visited, the paved lot was crowded, as you may see, but I think most everyone found a spot. The only vehicle I saw parked across the road was a tour bus that had dropped off its passengers and parked over there. There is both a stairway and a ramp up the hill to the bridge. We chose to follow the ramp up and the stairs down. Most visitors while we were there took the stairs both ways. 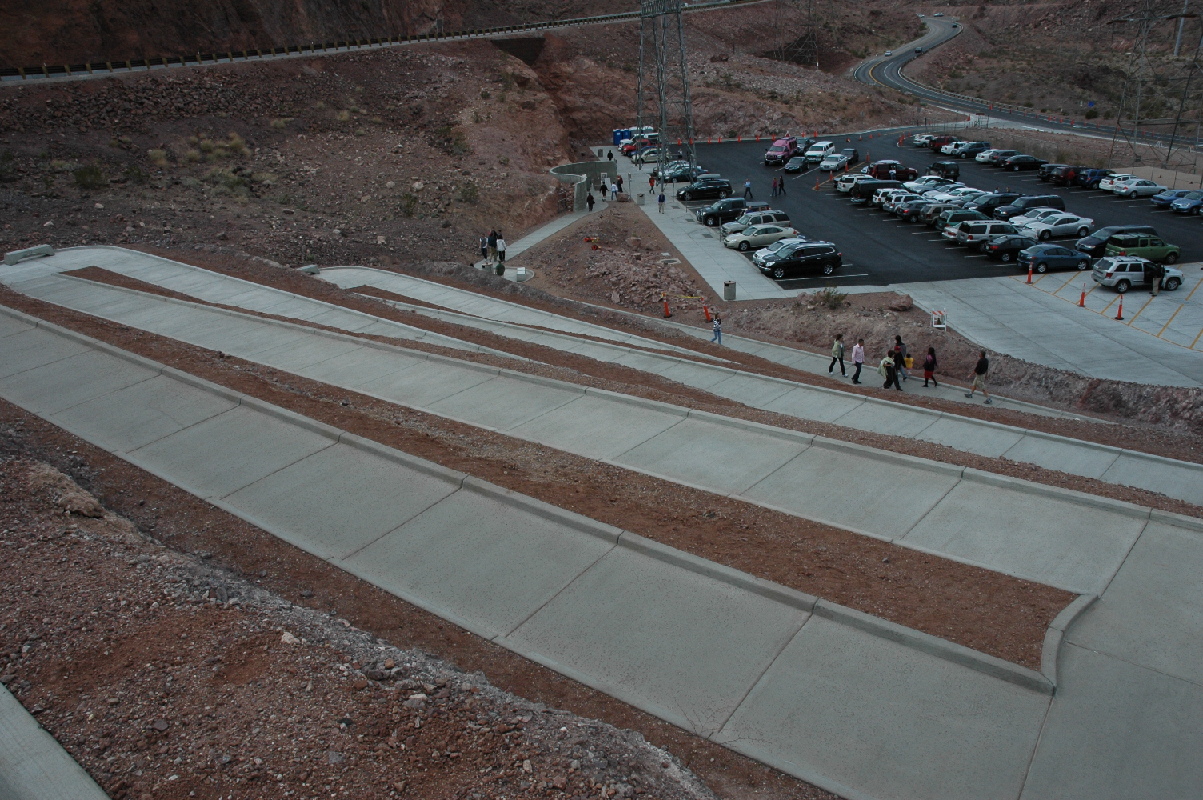 I suppose that this is as good a place as any to acknowledge that I fell victim to the Wizard's skill at stump-the-waiter trivia wagers. He proposed a couple of trivia questions we could pose to our waiter, but for the first several we both chose the same side of the wager. Finally, he suggested the question "What was the name of Popeye's girlfriend?" At that moment, I wished I had paid closer attention to the waiter: I remembered him as being young enough that he might not know that one, while the Wizard believed he would get it right. I requested that we alter the question to require that he be able to spell the girlfriend's name, but the Wizard would not accept that condition, so we went with the original version. The Wizard posed the question; the waiter grimaced a little, came up with "Olive" and was trying to come up with the rest of the name when the lady at the next booth shouted, "Olive Oyl!". The Wizard's immediate reaction was to declare audience interference, then he asked the waiter whether he would have been able to come up with the answer. The waiter mumbled a low-confidence-level affirmative and left. The Wizard offer to call it a no-bet, but I responded to concede the wager. He said he would give me a chance to win back my $1, but we never came up with another trivia question for which we did not choose the same side.

I mention this trivia wager in this thread because the Wizard once posted that he thought it would be a good trivia question to pose to a waiter or cocktail waitress to give the full correct name of the new bridge. With this in mind, I suggested three additional trivia questions that the Wizard might use some day.

#1. "What is the correct spelling of the name of the new bridge?" The Wizard missed this one on first try but quickly came up with the correct answer.

#2. "What were the sports in which these two men were proficient?" The Wizard knew what sport Pat Tillman played (and I would expect most people to get that part right), but he did not know of Mike O'Callaghan's sports participation prior to his war injury nor his sports teaching afterward. I would not be surprised if he found the opportunity to use this trivia question on others some day.

#3. "What name was used for this bridge prior to it being named for O'Callaghan and Tillman?" The Wizard did not know the answer to this one either, and when I told him the answer, he didn't consider it a good question/answer, even though the original name is used extensively in the signage along the walkway to the bridge.

Anyway, here's my warning that you should learn the answers to these before entering one-on-one trivia competition with the Wizard. :-)
Melman

Melman
Joined: Apr 12, 2010
It appears that the traffic bottleneck has moved up the road a bit, into the 2-lane section of road above the dam and up the hill into Boulder City.